Posted by Xtagged at 8:21 AM No comments:

Bump.com sent this real email, I now added the name Andy Couch. Andrew Phipps lied, No wait Daryl's email is fake look at our email from bump.com and then look at Daryl's Bump.com email below...

I just called you and left a message. I'd like to discuss the email correspondence you've sent to BUMP.com and Mitch Thrower.

You stated in your email to BUMP something about "bad data" that "Andy Couch" knew about, I'd like to know what specifically you are referring to in regards to your discussions with ????.

Let me know what time you are free for a phone call and what number to reach you?


BUSTED! The thing about the email above from Andy Phipps is that Daryl & Ryion Started Google smear/slander Xtagged campaign back in 2009! Look at the date of the email above from Andrew Phipps, (OK let's see I am Andrew Phipps & Andy Couch we just got a letter from Andy Esquivel and he says our billion dollar system has bad data, Hey lets google this guy and see who he is?) Get it, Andrew and Andy never say anything about Xtagged scam in this email nothing and then Andrew Phipps called me on the phone in front of Shar and other co-workers and yes I recorded the phone call and I have their voice-mails.


Wait until you all see the full email I sent to Mitch Thrower and Bump.com warning of flaw and to please call Steve Klemark at the Denver P.D in H.A.L.O program asap.

We are going to stop proving Daryl wrong now, he is a sociopath that's why he don't care when we make him look bad OVER & OVER. We gave all 2008 Xtagged, Inc paperwork 01/30/2012 to the Utah attorneys proving Xtagged is real now Davis pretrial has been moved to March 21, 2012 2:30pm God Bless You All, Amen


Update;
WE ALL WILL PROVE EVERYTHING 02/17/2012 9:30AM AT AMERICAN FORK! The A.F prosecutor removes Daryl's no contact order! Why because Daryl is full of it. Daryl is now known as the man that cried wolf at 42 years old! Once again prosecutor removes Daryl's NO CONTACT ORDER! Wait, Daryl said ANDY THREATENED HIS FAMILY... and Daryl posted it was a felony charge! Don't worry if you missed Daryl's rants and post they will all be in the documentary... Have you guys read Rebecca Dunn's letter to Daryl and Shirley, Rebecca is Daryl's biological mother here is the link;


#1001 THAT'S HOW MANY TIMES DARYL'S BEEN CAUGHT MANIPULATING FACTS; (OBSTRUCTION OF JUSTICE) IS THE LEGAL TERM. 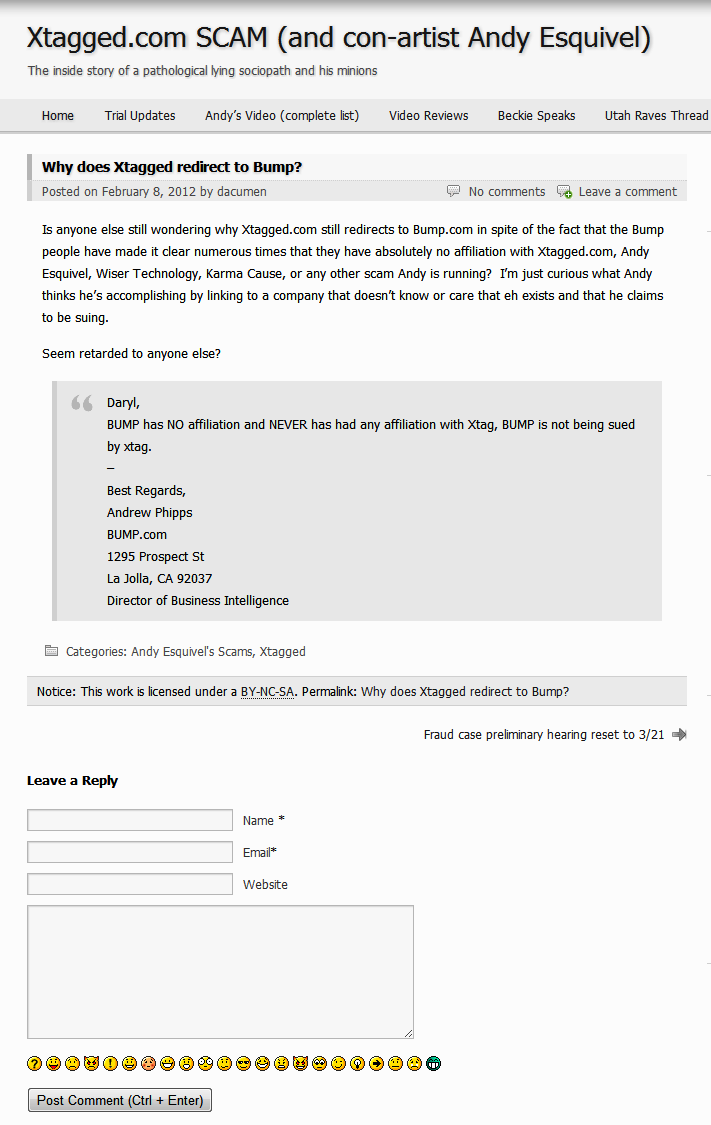 Here is video link of Daryl's crazy email about my son-  http://youtu.be/WpPS2GS_HRA

----- Forwarded Message -----
Also, for your information, the prosecutor in Farmington is going to be out of town on February 17, and his wife is having a baby a week or two after that, so he asked the court to continue the preliminary hearing.  It is now scheduled for March 21, 2012 at 2:30 p.m.  Please plan to be here on that day as well.
Now look at screenshot below from Daryl's slander blog created Dec., 05, 2011 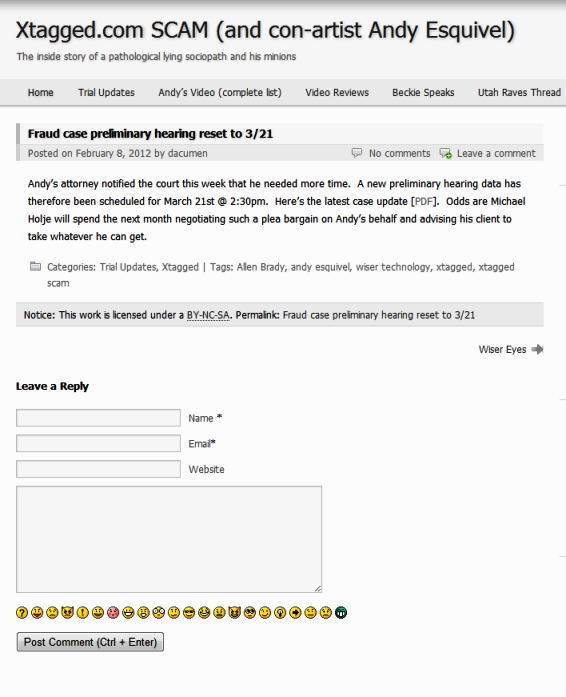